Despite the fact that one of Vine’s most followed people is just 16-years-old, we are sad to report that the teenager has decided to share a homophobic vine clip implying that gay people, or as he calls them – ‘fags’, are solely to blame for HIV and therefore the only ones who should get tested.

Nash Grier, shared the homophobic and misinformed vine clip in April to his 8.7 million vine followers, using a snippet from an Oraquick TV commercial about HIV. By comparison, Justin Bieber only has 1.7 million Vine followers.

Grier has since taken down the original video clip, but not before it was reposted by Youtuber Tyler Oakley.

Call me and people like me, 'fag' all you want, but spreading false information about deadly diseases is next level. https://t.co/W6X9MUrgUK

“Promoting a false stereotype that HIV only affects gays to his millions of teen fans is extremely dangerous,” Oakley wrote to his followers.

Grier is also quite opinionated on the subject of gay rights and gay marriage, tweeting: 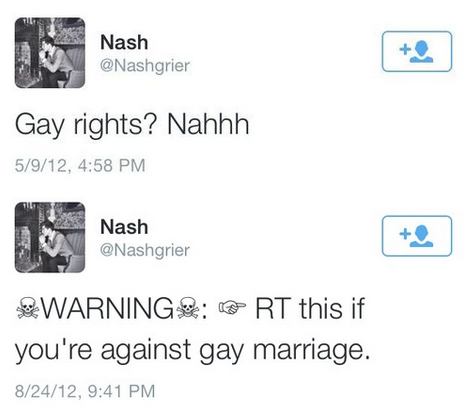 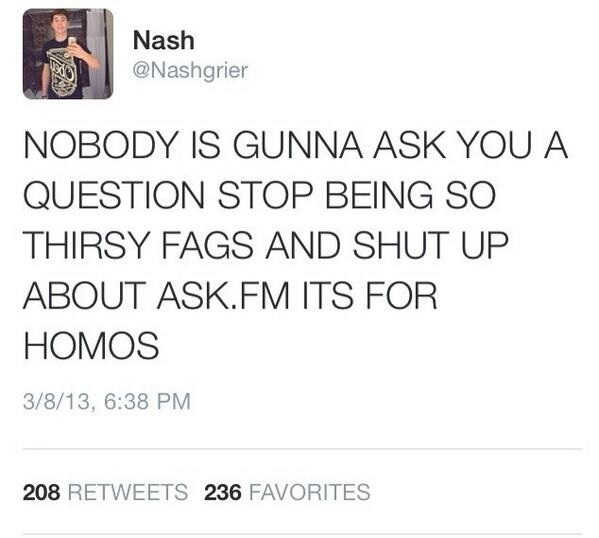 is there any way to delete this pile of shit from the internet pic.twitter.com/LSAjLcrZU4

Earlier this year, MTV paid Grier to produce a Vine in fancy dress in order to advertise its show, Teen Wolf. Vine ‘celebs’ can make over $10,000 for a six-second clip endorsing a brand or product. AwesomenessTV, a channel focused on teen-created content acquired by DreamWorks last May, recently announced a movie deal with Grier and his sidekick Cameron Dallas.


Nash, who is from North Carolina, is a God-fearing Christian who frequently consults his iPhone’s Bible app while on the road. “I don’t use cuss words, I try not to do anything awful. You don’t want to lower your audience,” he says. He shares that Jesus-camp vibe with dozens of other social-media luminaries. A recent Nash video bore the caption “Y’all twerk more than you pray these days #HolyBible #GasPedal.”

If you are a follower of this homophobic teen, it might be a good time to unfollow.